That “lazy” man you just blasted on Facebook to all of your “friends” for offending you with his “stench of body odor” in the Walmart check out line on the first of the month just worked all day to put food on the table for his wife and children. He works hard and long hours to support his family, but they still live paycheck to paycheck. He doesn’t get paid again until next week and is unable to purchase more hygiene products until then. He chose his family’s need to eat over that of his own personal hygiene. Still think he’s lazy?

That lady with the clothing that fits a little too tight that you just took pictures of on your new iPhone and posted to your social media accounts for a few good laughs just lost everything she owned in a house fire yesterday. She was gifted a small bag of clothes from her local church until she is able to afford more for herself. It’s not so funny now is it?

The young mom you just shamed in the parking lot while on the way to your car because her “spoiled brat” kid kept screaming and “throwing a tantrum” just left the doctor’s office where her child was diagnosed with Autism Spectrum Disorder. Your “I NEVER let my kids behave that way” and “If you would just bust his butt he wouldn’t act like that” comments only added to her fears of inadequacy as a mother. She needed some encouragement today, but instead only received your criticism.

Your Facebook post about the couple that paid for their buggy of groceries with a SNAP card made for a buzzing comment section. What you DIDN’T know however was that those “food stamp people” have never received prior assistance. They have both worked and “paid into the system” for their entire adult lives…until he got sick. The aggressive medical treatments made it impossible for him to continue working. After emptying their savings and retirement accounts, and liquidating all of their assets, the money finally ran out. The bills soon began piling up, and after months of mounting medical debt, travel expenditures, copays and insurance deductibles, with only one income now, they found themselves unable to purchase food.

She bravely walked through the doors and sat down on the pew right in front of you. You didn’t know her personally, but you had HEARD all about her. She had a reputation and a colorful one at that. You didn’t want to be the first one to go over and greet her. What would people think if you did that? Her promiscuous past was no secret. It was public knowledge and her reputation amongst the community and congregation sparked judgmental glances and whispers. Rumor had it she was pregnant now too. Yes, she had made some mistakes, but what you didn’t know was that at the age of 12, she was molested by her mother’s newest boyfriend. She began experimenting with drugs and alcohol, desperately seeking something to numb the pain that she was experiencing. She was removed from her mother’s home and placed into foster care, where the trauma she had previously endured was repeated over and over, year after year, by people she wanted so desperately to love and trust. She just wanted someone to love her; someone to protect her, and she had looked in all of the wrong places. She wanted to change her life and to give her baby the life that she never had. She wanted to know more about this Jesus that she had heard others talk so much about. Who was this Father to the Fatherless? Who was this man that loved her so much that He died so that she could be forgiven? Can you love her like Jesus does?

Everyone you meet is fighting a battle. Some of those battles are visible on the outside, while others are not. We can’t always see the entire picture. Be kind…always. 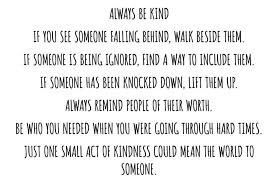 I'm a lover of Jesus and coffee, a happy wife, a mother to many, a homeschooler, and a Sunday school teacher. I'm enjoying this crazy, chaotic, unpredictable, and beautifully blessed life...one day at a time. View all posts by Heather Kennedy